The VRE Management subsystem is the family of services and software components responsible for the definition and the dynamic deployment of VREs as well as the management of resources in a Virtual Organization. A user-friendly user interface supports VREs definitions by guiding the user during the specification of the desired VRE features. Through the same interface the designer is informed on the optimal deployment plan identified by the system. In fact, the resulting plan is based on availability, QoS requirements, resource inter-dependencies, and VRE sharing policies, but also on monitoring of failures (resources are dynamically redeployed) and load (resources are dynamically replicated). The Resource Manager, by coordinating four distinguished services (Deployer, Software Gateway, Resource Broker, gCube Hosting Node Manager), realises the VRE dynamic deployment by, respectively, collecting service implementations, selecting target nodes for deployment within the infrastructure, and hosting resources implementations at selected nodes. 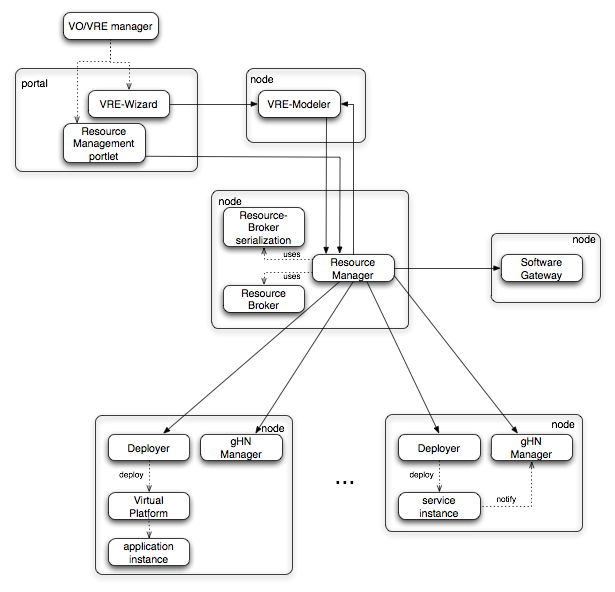 The primary role assigned to this subsystem consists in

The stack of services forming the subsystem has been designed according to this patterns:

Starting from gCube 2.5.0, the dynamic deployment at the heart of the subsystem has been extended to target also different platforms that gCore. This led to define the following two additional components: