a gCube release process includes several activities (e.g, development, build, testing, packaging, etc...) and each activity involves a number of different persons playing different roles. In this section we define a set of roles and their duties and responsibilities in release's activities. Where available, a binding between role and persons playing that role is provided.

Release Roles in a nutshell 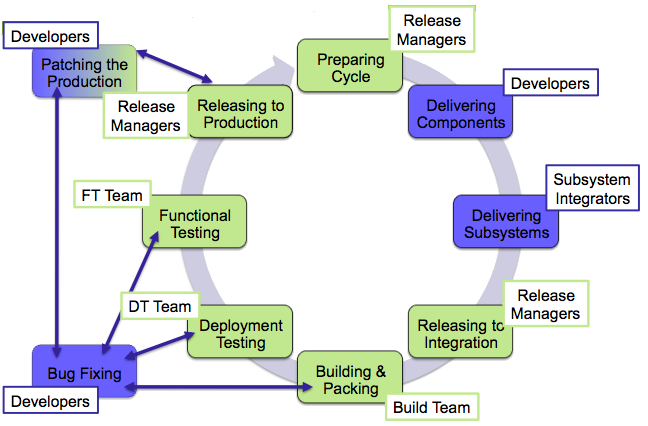 Picture on the right shows which roles are defined for the Release Cycle procedure. The Release Cycle procedure is overseen by Release Managers that manage the overall procedure progress and fulfill activities at project-scope. Subsystem Managers play a role similar to Release Managers, but in the scope of the assigned subsystem. Developers implement and fix the assigned components and usually provide documentation for them (playing, in fact, also the role of Documentation Author). Testing team is formed by Testers who carry out tests against software candidate to be released. Finally the Documentation Editor manages entire documentation process.

Responsibilities and assignments for each role are described in details in following sub-sections: